Smoke screens on the dikes ... 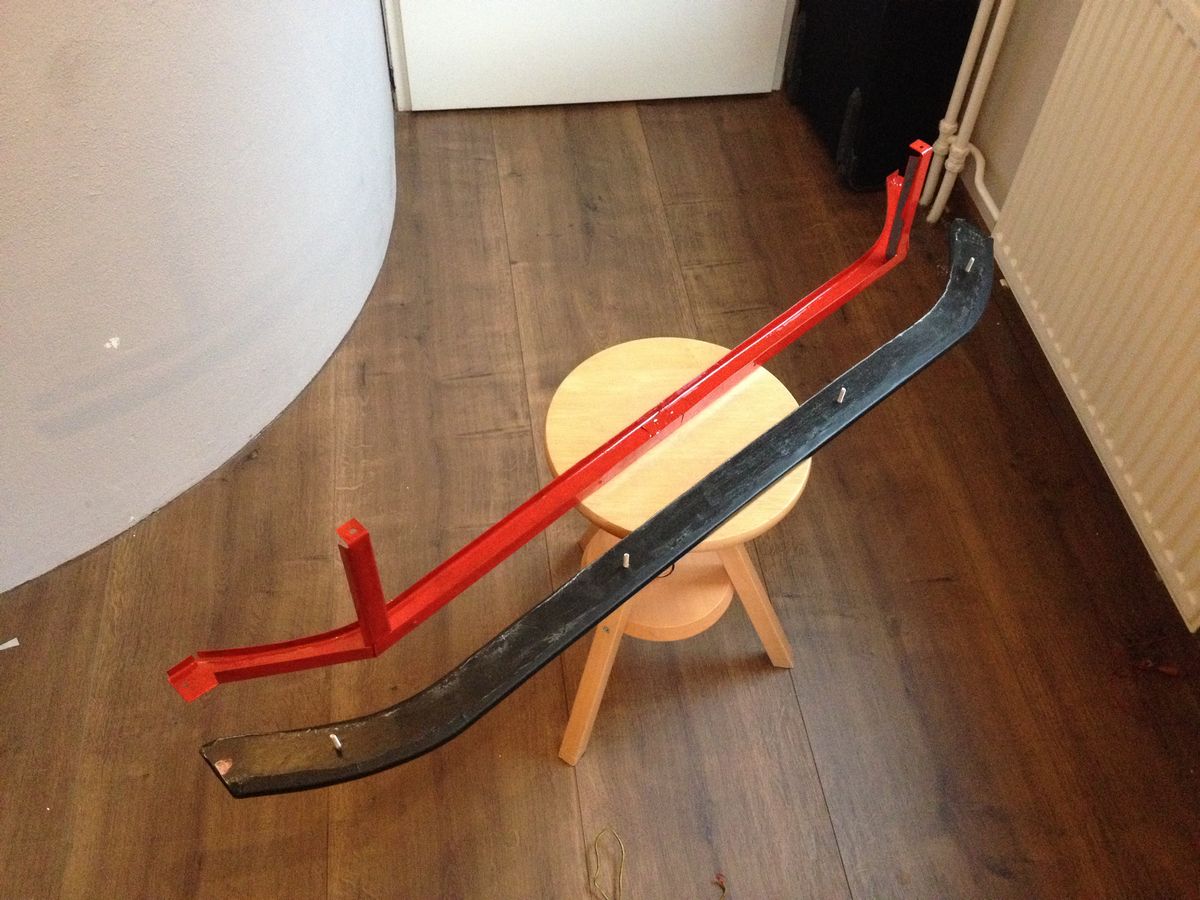 One thing that still needed some work was the parcel shelf. When we acquired the MGA, the parcel shelf was missing, including the frame that supports it. It turned that that a person nearby our town also has an MGA with a parcel shelf, who was kind enough to invite me for coffee, and some MGA stories. He also let me draw and measure the parcel shelf frame as well as the wooden framework attached to the metal frame. 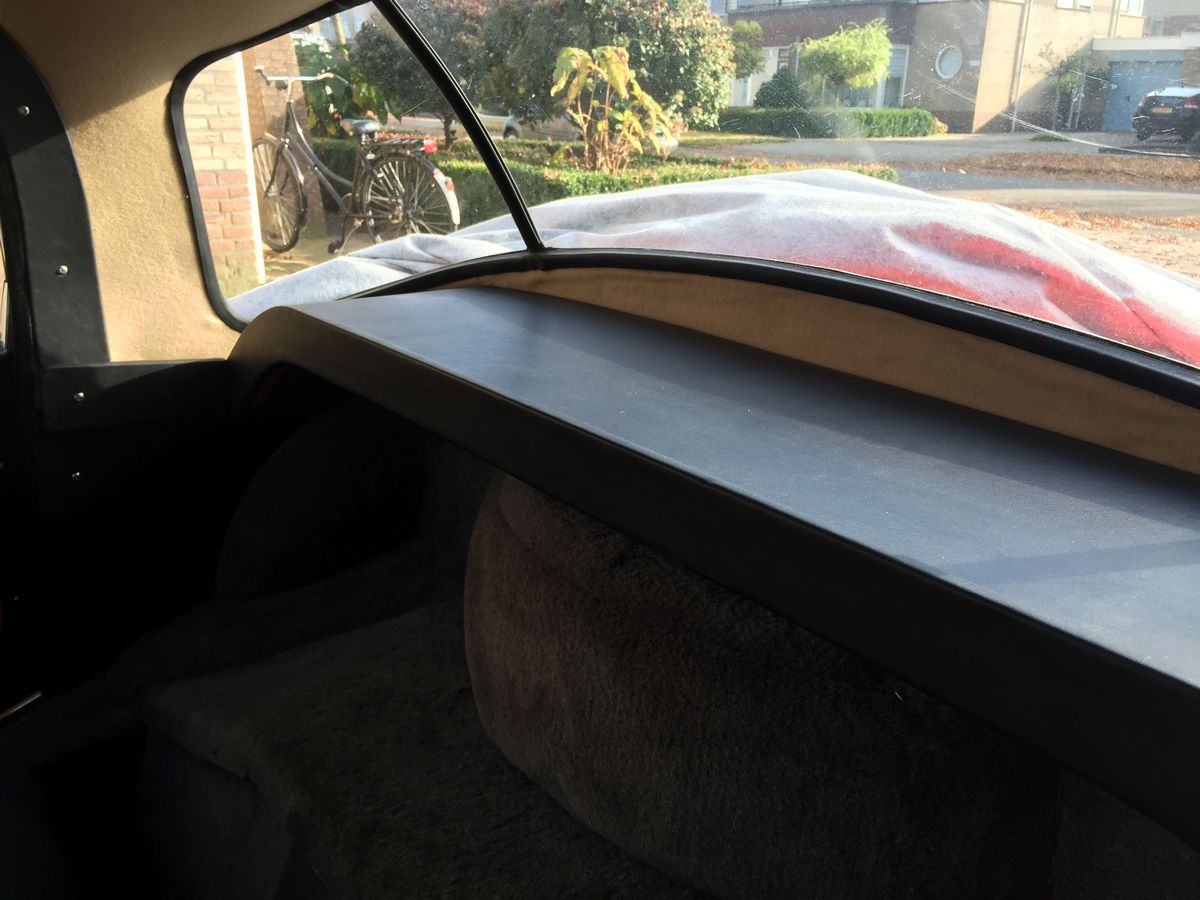 The frame is easy to make using a piece of 0.8mm sheet metal. It is fun just shape these pieces from a straight piece of metal. Once the 2 ends were formed we fitted them in the car and welded them together. The rest of the frame is rather simple to make. We gave it a few layers of paint and then focused on the wooden top and the wooden strip that is attached to the frame. A nice project for the winter time. Fitting in the car and then quickly back inside to continue working on the parts. It indeed took a bit of time to make it all fit. But we are pleased with the results. 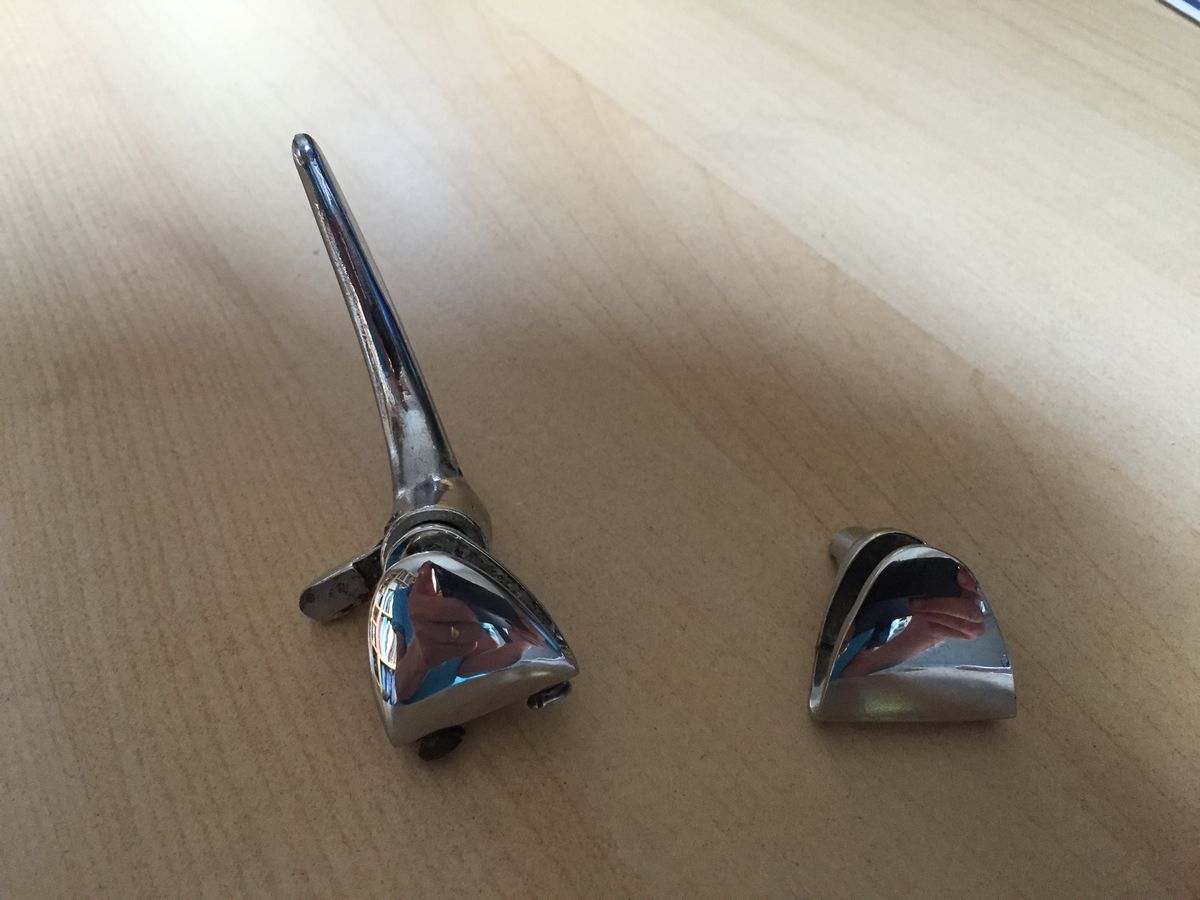 Another thing that needed attention was broken little chrome handle to lock the small triangular window. Efforts to find a spare were not successful and so the only option was to remake it from steel parts we had. After some welding cutting, grinding we were able to copy the part. It fitted perfectly and so the only thing left to do was getting is chrome It is amazing what a little patience and some time at the workbench can produce. The piece on the right is the broken one, glued together to make the copy process easier. 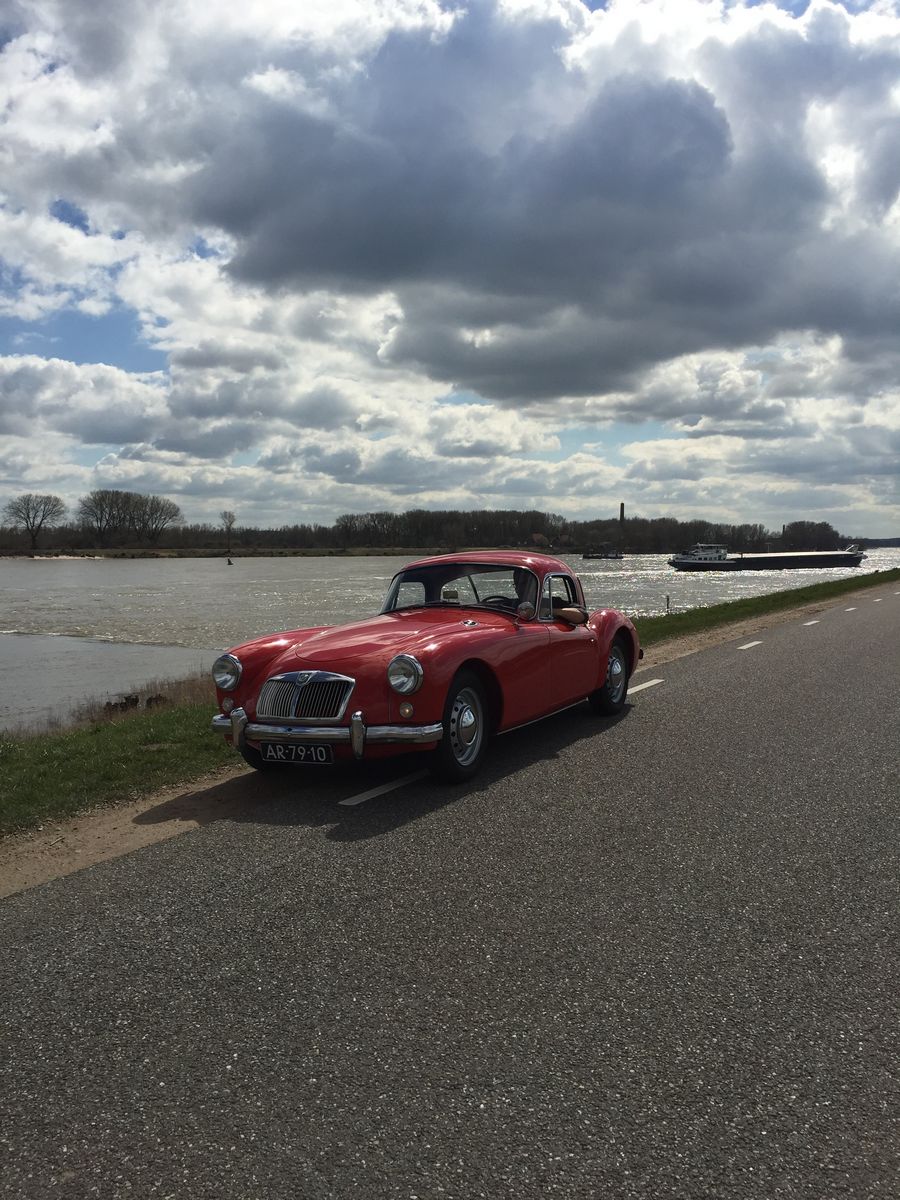 We have been driving the car now for just over 1500 kms. We thought that the initial oil consumption and blue smoke from the tail pipe would eventually diminish. But that clearly was not the case. The spark plugs were always black with oil and idling for a traffic light was embarrassing. Looking through rear view mirror one could see the car behind slowly disappear in a cloud of smoke. After consulting with some experts, we had no choice but to take out the engine once again. It turned out that we made a mistake in not measuring the gaps of the piston rings. These were clearly too small and scraped the cylinder walls. It also had damaged the pistons themselves so that they had to be replaced. It also turned out that some of the bearings were damaged as a result of dirt in the oil gallery. 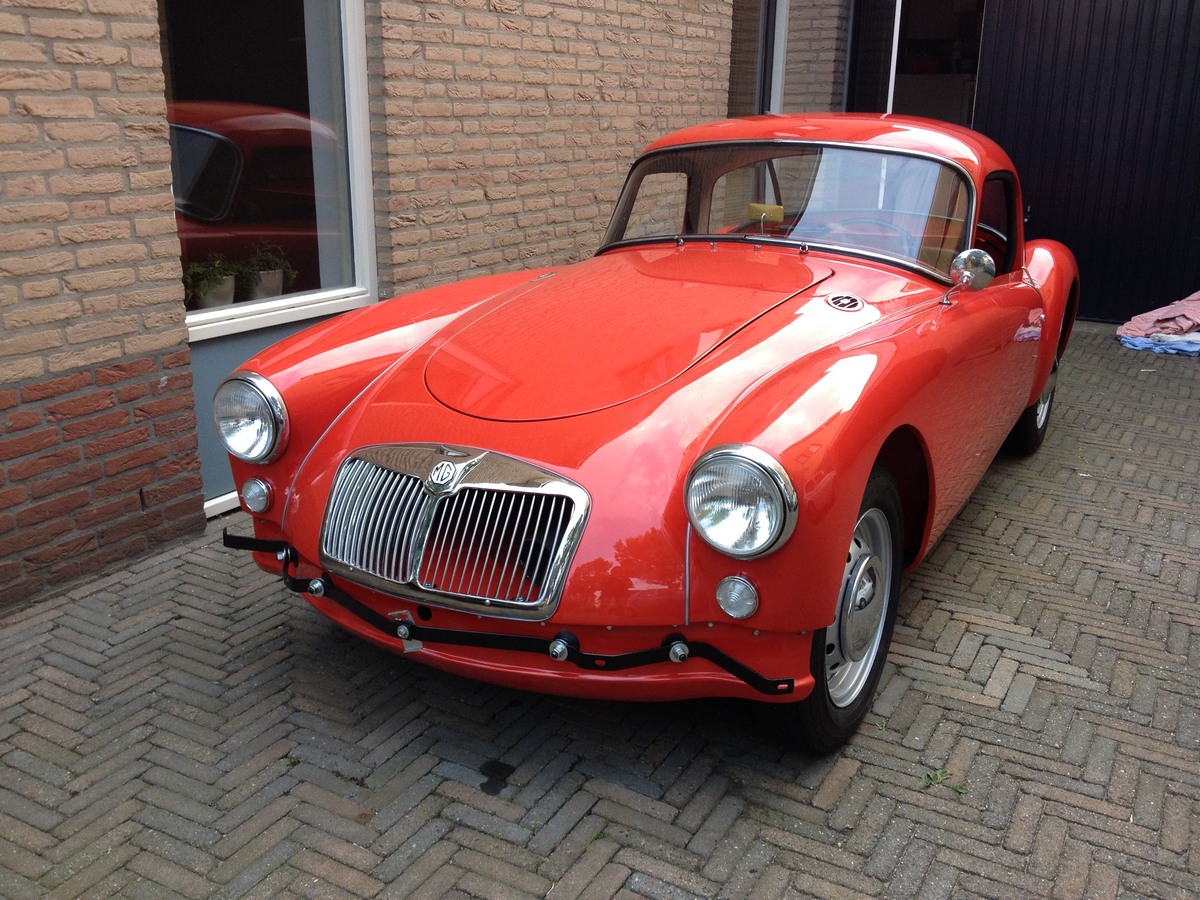 After the milestone of the short run around the block, we mounted the fenders, headlights, tail lights and other attributes to make the MGA complete. For the headlights we compromised the originality of the MGA by installing relais so that the main current does not run through the little light switch any more. We did not want to maintain the originality with the risk of loosing the MGA in a blaze. Additional advantage is less voltage drop and thus more voltage at the lamp providing more light. Once suitable LED headlights are available, we can remove the relais. The installation of the windows in the doors was and still is not quite to my satisfaction. That will still need a bit of attention. The panels on the inside of the door are a bit thick and make the doors difficult to close. Nice job for the winter. 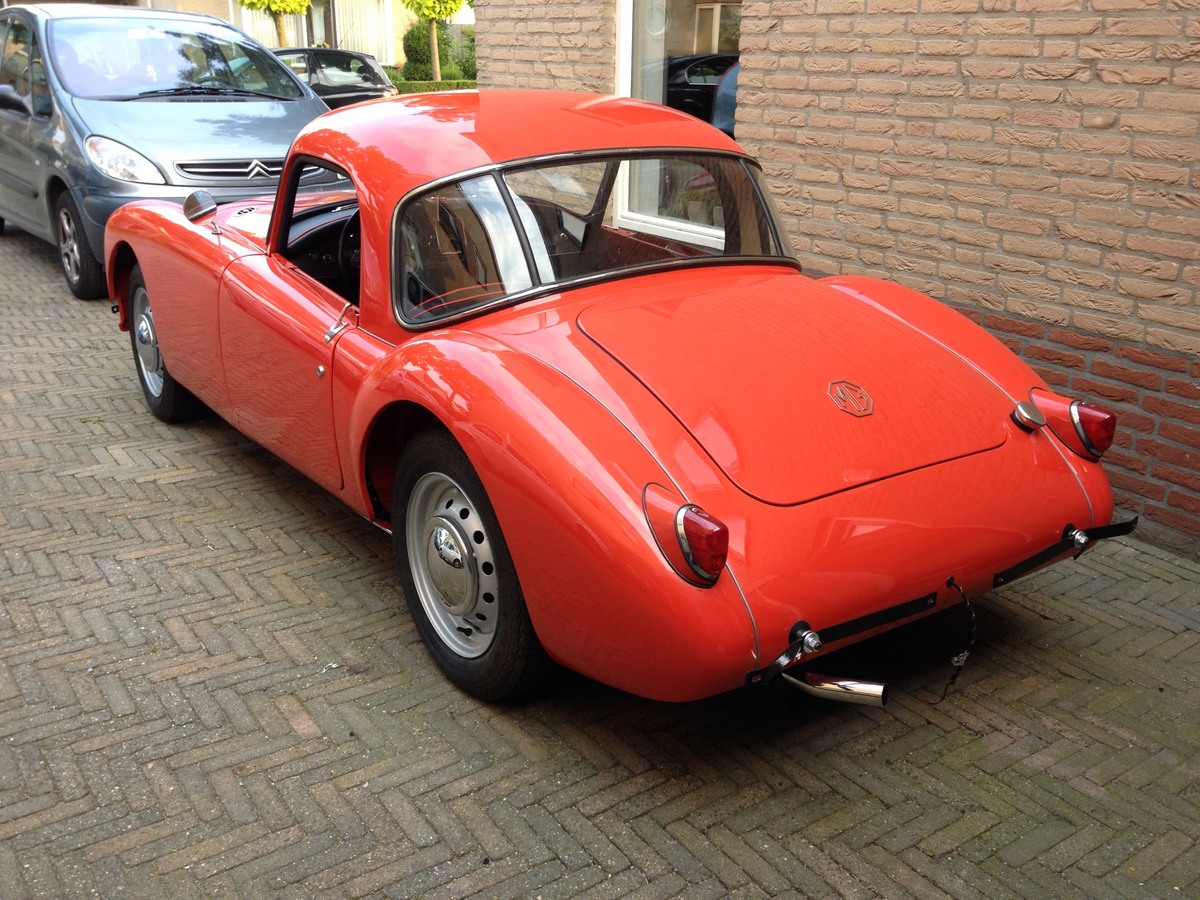 The final touch was the installation of the re-chromed bumpers and over-riders. It took a while to get that completed but we were lucky enough to know another MGA owner who let us use his old bumpers for the time ours were getting re-chromed. That allowed us to get the paperwork done, such as registration, value assessment and insurance so that we could finally hit the road and cruise the little roads that line the meandering rivers near where we live.

A couple of issue surfaced while putting on the first couple of miles. Noise in the diff turned out to be a bolt on the drive flange I forgot to tighten. Another problem was severe oil leakage at the front of the engine. Despite all the famous jokes about oil leaking British cars we needed to put an end to that and replaced the cover over the distribution along with a new felt seal, which solved the problem. 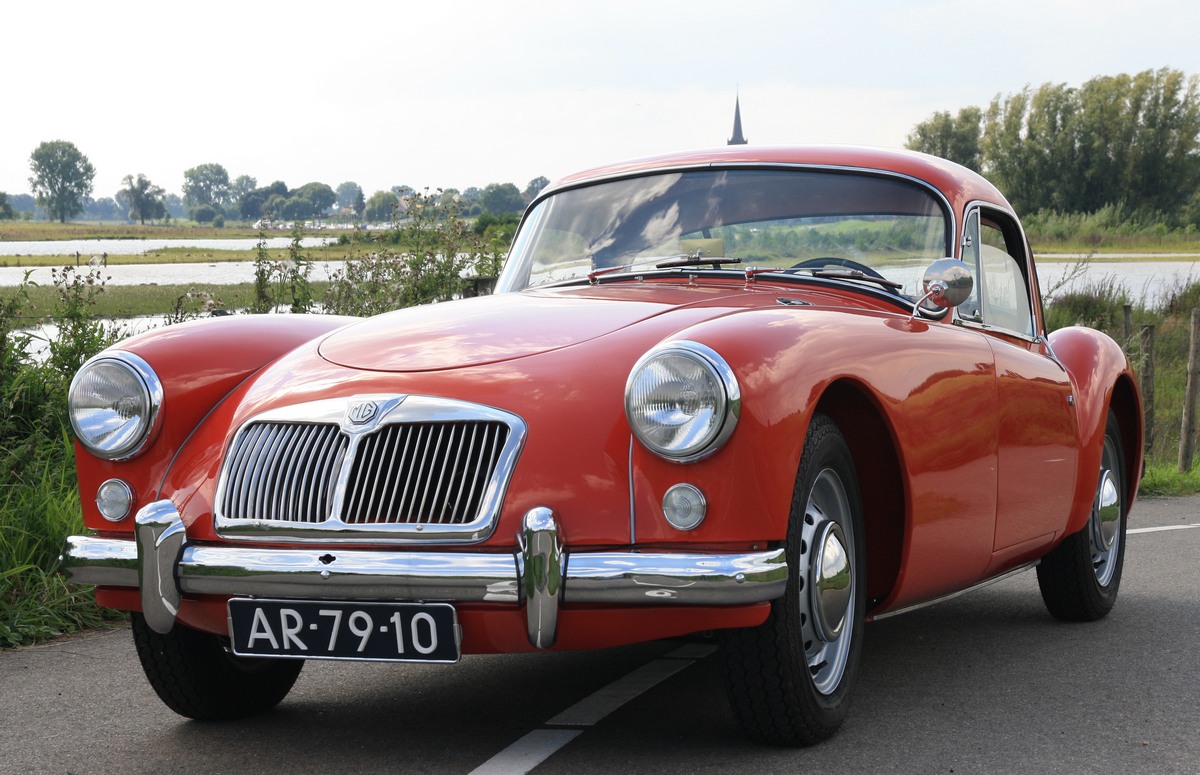 In the meantime we put another 500 miles on the odometer and it is a real blast driving the MGA. The engine never stalled or even misfired. The only time it did not immediately start was when I forgot to switch on the ignition. Despite the fact that the engine runs smooth, it does burn a bit of oil, up to a point that is becomes annoying or at least embarrassing. Of all the things that still need attention this is definitely one of them. Other things that still need work is the interior. I put sound deathening and heath insulation in the car, which was not a bad thing in retrospect. Even with this insulation the tunnel right behind the engine becomes warm. The final carpet still needs to be installed, so that will make the drive in the MGA more comfortable and enjoyable.

Apart from the carpet, the fitting of doors and windows I still need to install the parcel shell behind the seats. When we got the car it was missing and through the different forums we had little luck finding someone who could show an example. We will see: if nothing else we should be able to construct one just from photo's of a coupe on internet.