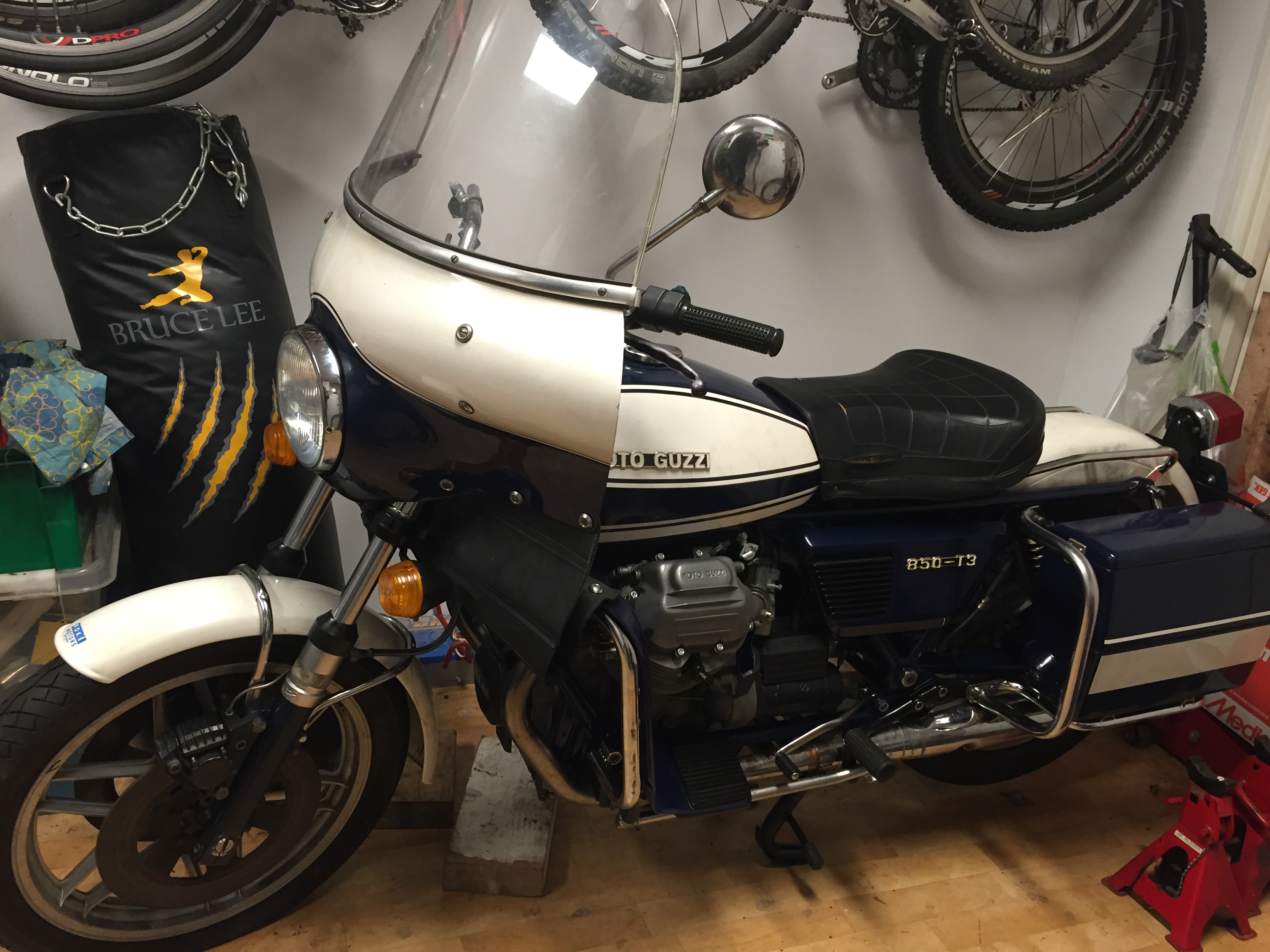 It took a little while, but finally the missing chrome parts came in. Nice and shiny. We ended up not re-chroming a lot. For the most part a solid polish was enough to bring back the shine. Having everything in place, the next step was to bring the bike out in front of the house and give it a try. Well, that did not go very well. After a couple of attempts it turned out that the ignition timing was off. With that corrected and half an hour later, the Guzzi came to life and jumped into action. We tested the ignition with the flash lamp, and adjusted it only slightly. For the rest everything checked out just fine. All the gears appeared to work and so it was time for a test drive. 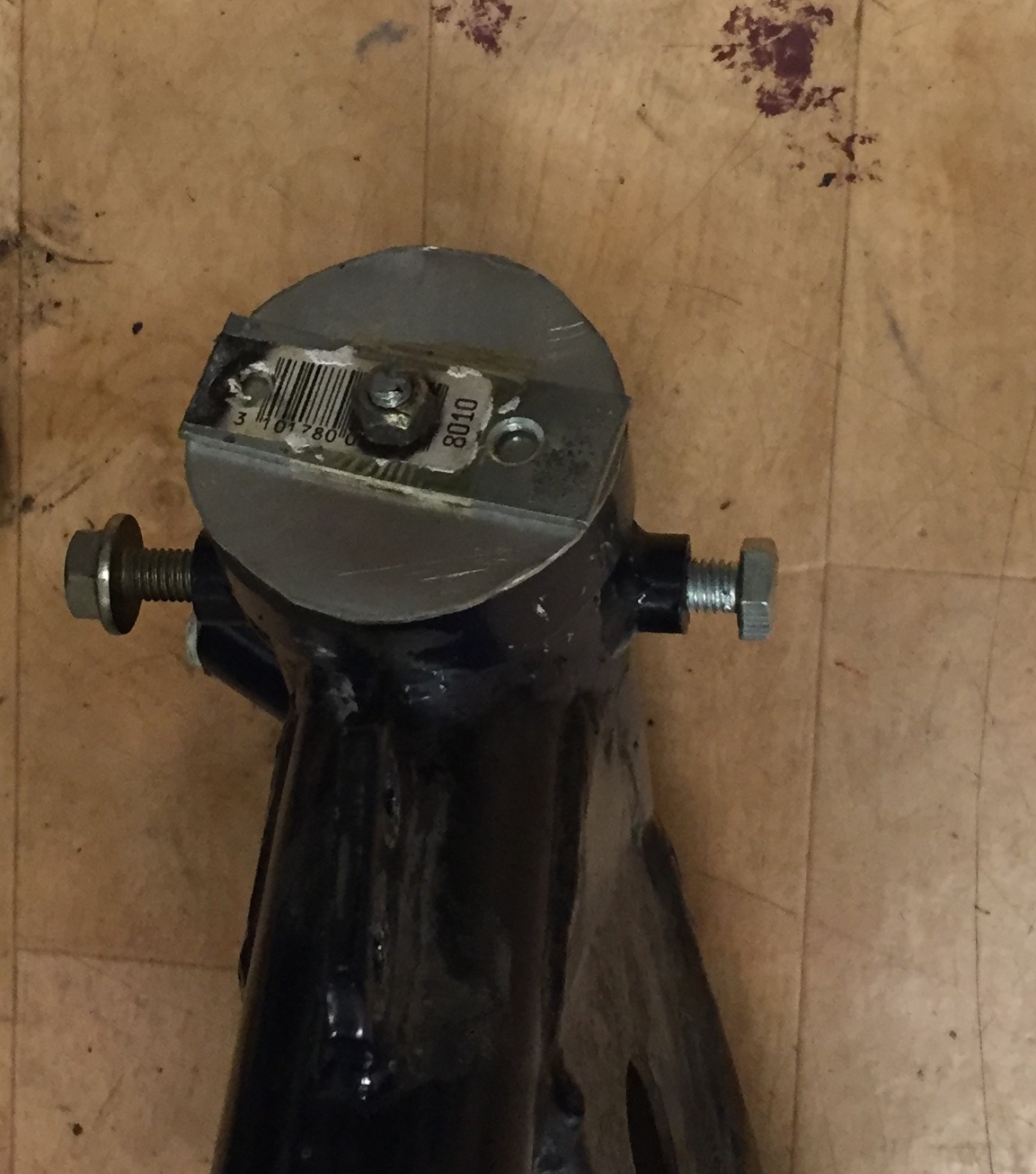 With the frame separated from the engine block and gearbox, it is not much extra work to strip the frame completely for a new layer of paint. There  was some rust on the frame in particular near the battery tray. We decided to go for powder coating. The end result is not as shiny as hi-gloss spray paint, but it is more durable. All openings in the frame must be carefully closed. We cut small aluminium covers and tapped the edges down a little bit to get a good fit, plus a metal strap to keep it in its place. Another pitfall is bearing grease left behind. 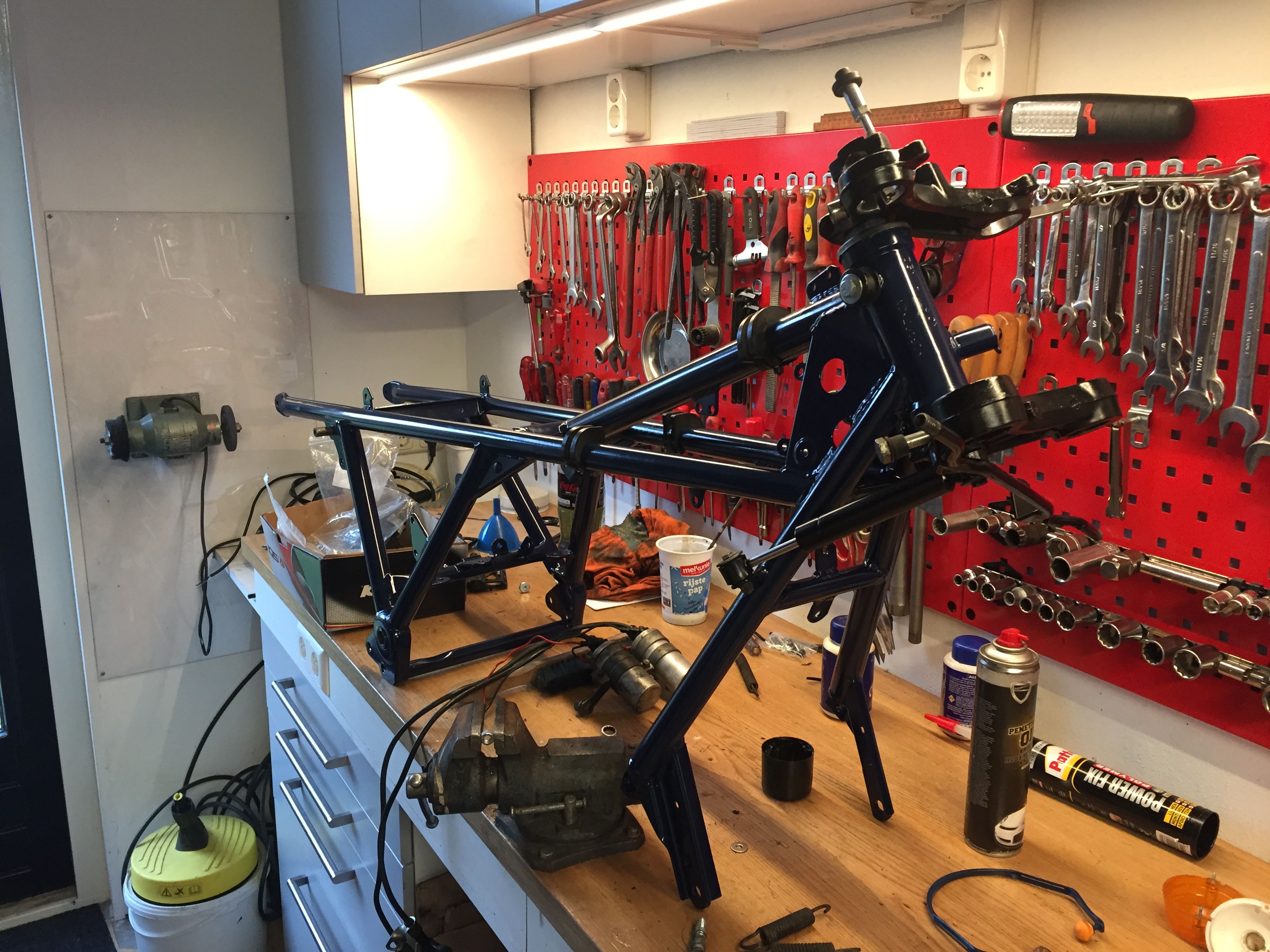 The temperature of the baking process is about 200 degrees C. That will make grease run easily and with a bit of bad luck it can compromise the paint layer. It is also important to close all holes in the frame that are intended for mounting components. Especially the threaded holes. With normal paint jobs this a bit easier.

Some parts had bad chrome. In some cases the chrome was coming off like flakes. Clearly an example of bad qualify chroming. So that needed to be redone.During the re-assembly of the motorbike we made the wiring loom a bit tidy. In some places it had badly attached connectors, which we solved using a soldering iron and heat shrink. One odd thing we came across was that there were 2 flasher connected in parallel. I did not quite understand the point. According to the schematic, there is supposed to be only one. So I removed one and it works just fine. 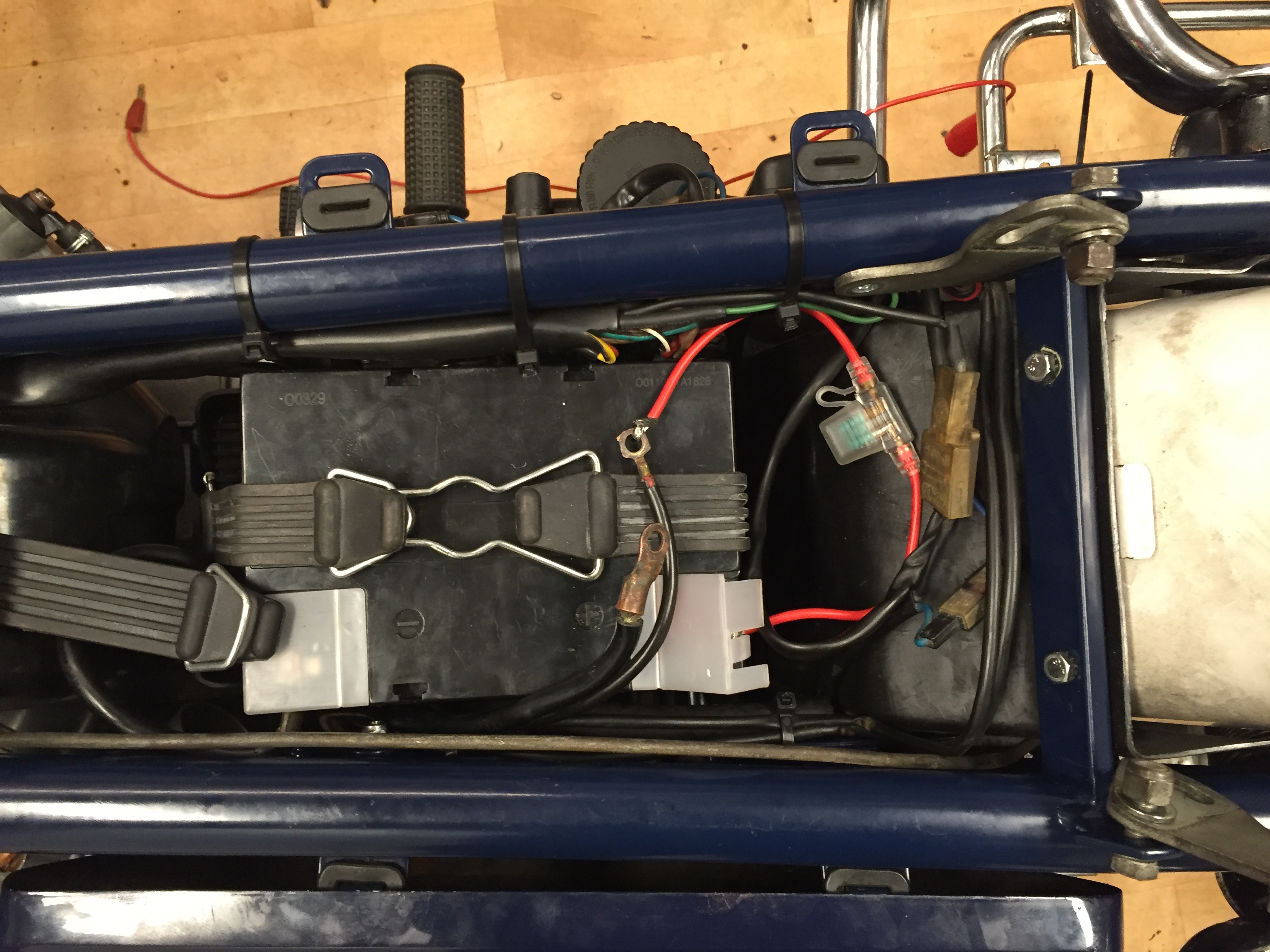 Next the rear brake cylinder appeared to be leaking. Fortunately a good hone and new seals did the trick. With the filling up of the brake system we considered to use the modern DOT5 silicon based brake fluid. The main advantage is that the intervals for renewal can be stretched a little longer. Plus this DOT5 does no attach the paint. However we cold not be 100% sure that the seals were compliant with the DOT5 fluid. So we decided to put the good old DOT4 in the system and plan for a renewal of the fluid in 2 years from now.

With all the electrical components connected and a new battery installed, it was time to do some testing. During the test I connected a fuse in series with the battery in case we made a bad mistake. But fortunately everything worked properly, with the exception of an indicator: I must have swapped 2 wires for the left and right indicators. But that was easy to solve. The Guzzi still has the old fashion ignition with breakers. So to set the timing is easy enough with a meter. Once the engine is running we can fine tune the ignition with flash lamp. Now it is just waiting for the chrome parts.

Start of plan B 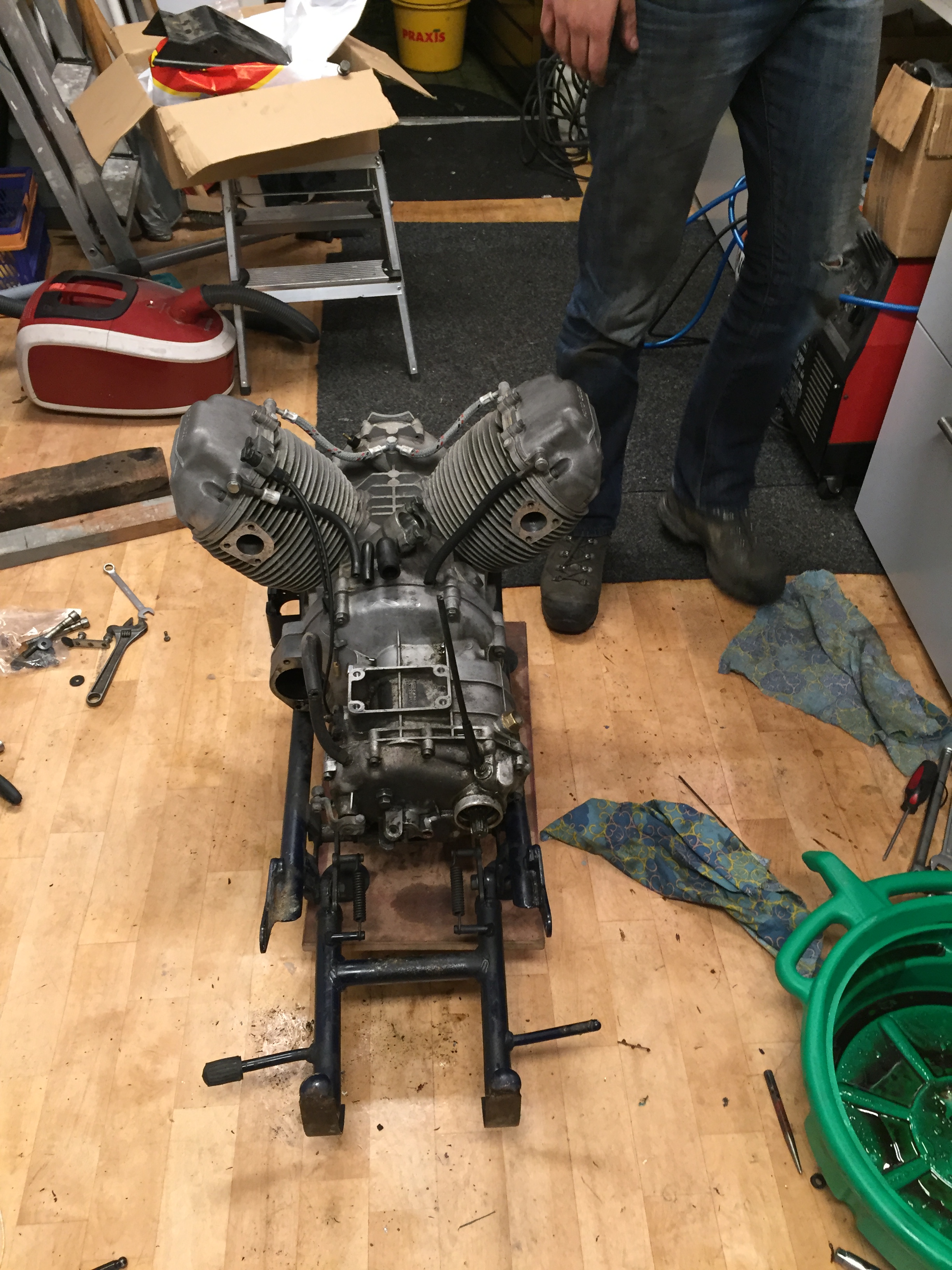 So just doing a regular maintenance job on the ’82 Moto Guzzi 850 T3 was not sufficient to turn this motorbike into a reliable touring vehicle and so we went for plan B. The oil leakage clearly came from the clutch housing and so that needed to be opened up. To get access to the clutch required the gearbox to be separated from the engine. 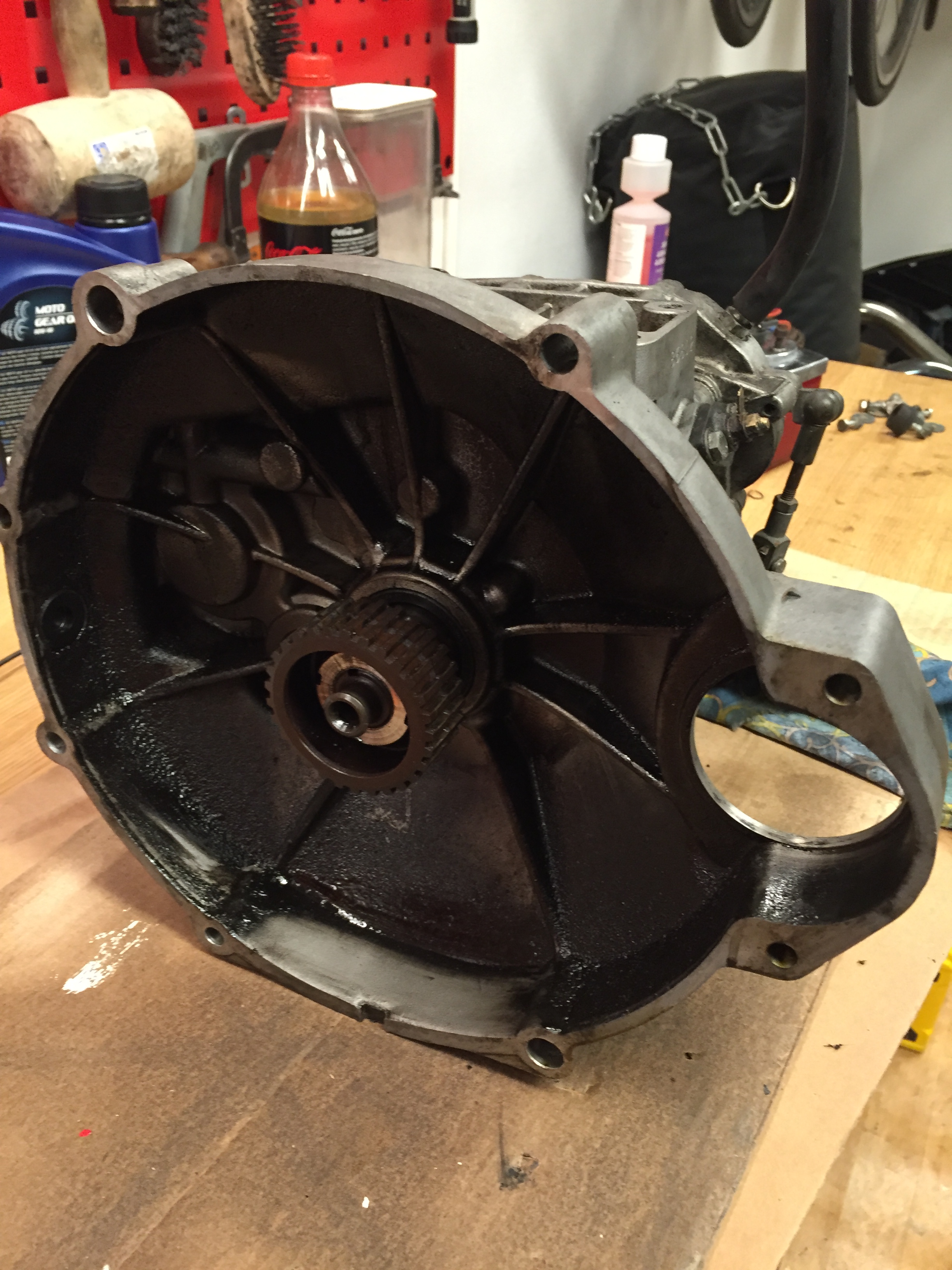 With the Moto Guzzi this can only be done when the frame is removed from the engine and gearbox. First the rear wheel is removed along with the rear drive unit and cardan. Then the engine must be supported with a few blocks of wood and all the wiring, cables and carburettors are removed from the bike. After that the 2 frame parts running underneath the engine are disconnected from the frame. Once that is done the upper part of the frame can be lifted and wheeled away on the front wheel, leaving the engine and gearbox on the supporting wooden blocks in the middle of garage.

Now the gearbox can be unbolted from the engine, which gives us access to the clutch. The inside of the clutch housing was a big mess. Both on the engine side as well the gearbox side there was a thick layer of oil and dirt. 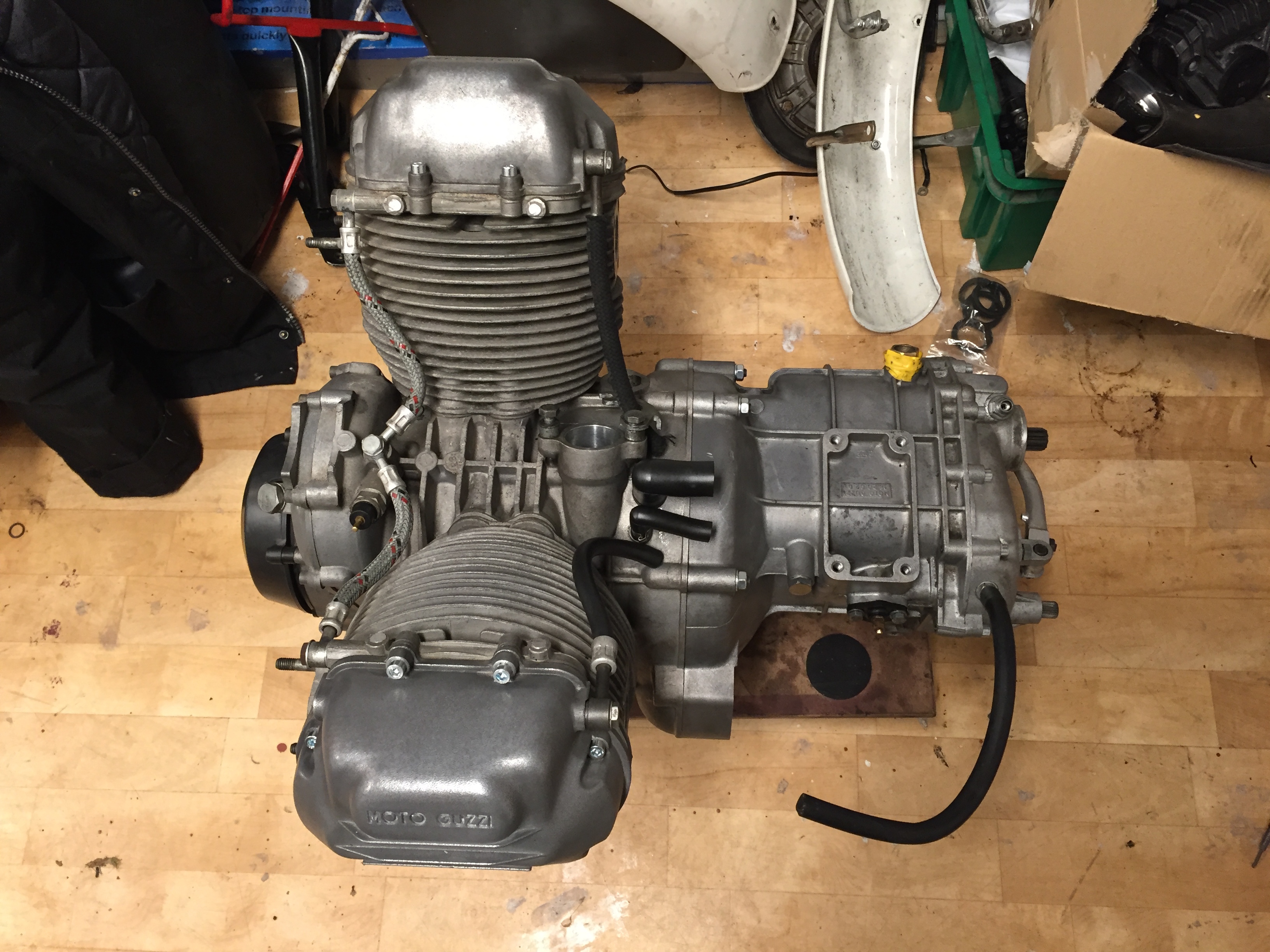 It was clear that both gearbox and engine seals needed replacement. Replacing the engine seal requires the flywheel to be taken off. But apart from that it is straightforward. During the re-assembly of the flywheel and clutch requires the clutch plates to be aligned and centred.

The gearbox requires some dedicated special to disassemble. Plus another issue surfaced: the thread of the oil plug was damaged. But putting a tap in with the gears still in place is not a good idea. I turned to an expert with all these tools readily available rather than acquiring them. 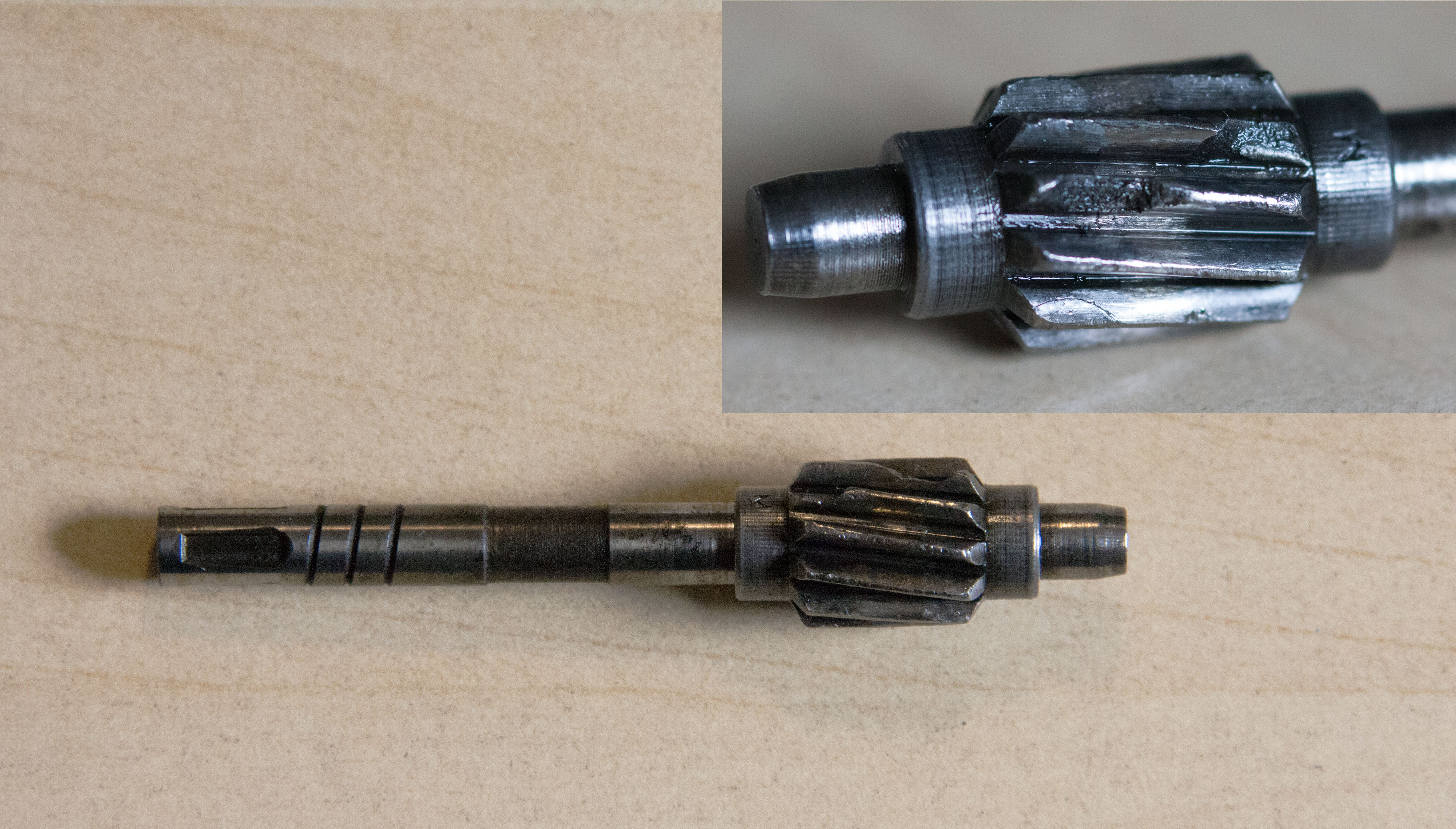 Lucky for me there is a Moto Guzzi expert right down the road: Teo Lamers in Nijmegen. That turned out to be less expensive in the end and they did a quick and nice job. With all new seals and O-rings in place the gearbox was reunited with engine.

During the disassembly of the gearbox I remove the old oil and I noticed more that usual metal in the oil. During the further disassembly it turned out why: a little ring had gotten stuck between the speedometer drive gear. This left the ring in little pieces and the drive gear with a broken tooth. This ring was obviously dropped in the gearbox. Luckily it did not further damage. And only replacing the drive gear and the little ring was sufficient.

“Paul, I have an old motorbike that has not been used for a long time. It probably needs some maintenance. Can you take a look?” That is how the story on this 1982 Moto Guzzi 850 T3 Polizia started. The motorbike has been parked for several years. The oil stain on the cardboard under the carter indicated that there were issues to be expected. Still we assumed that just a regular maintenance job with oil changes and checks would do the trick. If the worst comes to the worst we could still switch to a plan B.